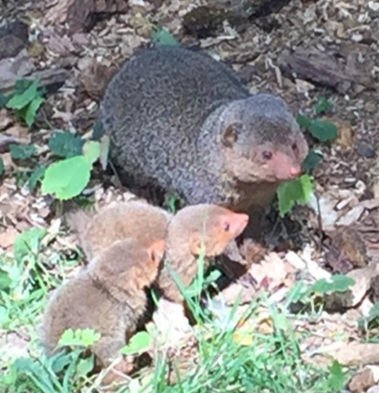 Dwarf Mongoose (Helogale parvula) are from Africa.  They live in groups of 15 and have a complex social structure with each individual having a job to do such as being look out.  They do not have a permanent home and will move around a 75-acre area looking for food.

Habitat:   Dwarf Mongoose are from the forests and semi-arid deserts in Africa,

Population:  The International Union for the Conservation of Nature (IUCN) Red List and other sources do not provide the Dwarf Mongoose total population size, but this animal is common and widespread throughout its known range. Currently, this species is classified as ‘Least Concern’ on the IUCN Red List and its numbers today are stable.

Behaviour: They live in a female-dominated society.  A dominant female will live with her mate and will lead a group which is mainly family.