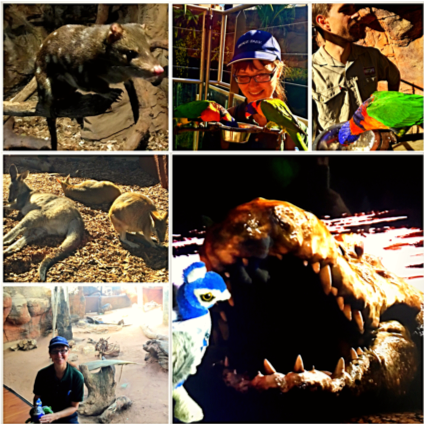 Our Gardening Department team member, Gillie, continues her story from her adventure Down Under… 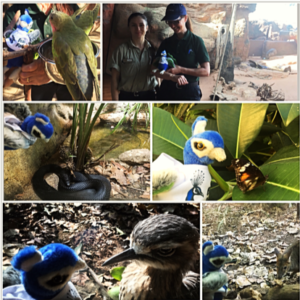 Bertie Beale, our mascot, and I visit Wildlife Sydney Zoo and the Sealife Aquarium. Once again staff and volunteers are very generous with both their time and knowledge and I was able to exchange lots of information.

Wildlife Sydney has a variety of animals and is home to what is often referred to as the Aussie big 5 – koalas, kangaroos, crocodile, wombats and platypus. Although I am a Beale Park gardener, I never pass up an opportunity to learn more about the animals and birds – we are a wildlife park after all.  I had a fascinating lesson in Red Necked Lorikeets and Princess Parrot care, and learned something of the plants within the habitats that they live in at the zoo. At Beale Park, we have an impressive collection of birds which is continually expanding. This year a new aviary was built as part of our ongoing development and conservation work at Beale.

At Wildlife Sydney they have Western Grey Kangaroos, which are only found on Kangaroo Island. This mob of roos are rescued, the staff saying these ones have especially good personalities and are quite chilled. Bertie made many friends, and rather foolishly tried to get friendly with a croc, forgetting that the animals are still wild and need to be handled with a great deal of respect and care! Fortunately Bertie was ok on this occasion.

We were fortunate enough to see the platypuses, Jackie and Zoey at play: the average size of a female platypus is only 43 cm, much smaller than I expected – and we also spent time with the koalas. Beale Park is a member of BIAZA, who on 16/07/18 announced that koalas are coming to England. For more information on BIAZA visit https://biaza.org.uk/news/detail/koalas-are-coming-to-england. Currently, the only place to see koalas in the UK is Edinburgh Zoo. 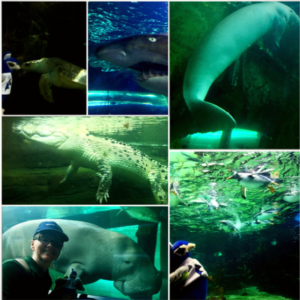 From there we were taken next door to the Sealife Aquarium, which, like wildlife Sydney and Beale Park is also involved with conservation. Bertie and I met ‘Pig’, a dugong rescued when orphaned at a very young age. After a period of rehabilitation Pig was released back into the wild. However, after being washed up again after some months the decision was made not to rerelease him again as it was unlikely he would survive. Whilst dugongs won’t be seen at Beale Park, it was fascinating to learn about these amazing creatures from their keepers. Did you know dugongs are more closely related to elephants than any sea creatures!

The sharks thought Bertie was lunch, so we avoided the shark dive and visited penguins instead. Lots more adventures still to come!