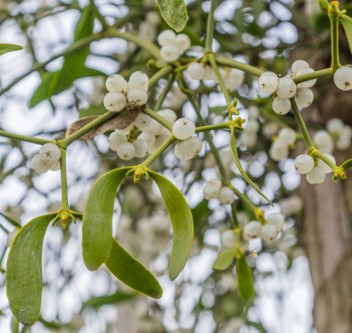 Tales from the Shack – The Lost Kiss (all about Mistletoe)

Well folks, it’s the festive season once more but what a different one this will be. The two metre hug, the bottle of sanitiser instead of whiskey and the turkey that could feeds three households three times over.

We hope there will still be an abundance of good cheer but something that may be in short supply is Mistletoe. With the cancellation of some Mistletoe fairs (auctions) and less demand from pubs and parties, there may be fewer opportunities for that sneaky kiss under those white berries.

Mistletoe, (Viscum album), is a hemiparasite found on some of our common trees, typically Apple, Lime, Poplar and Oak. It obtains water and nutrients from its host by a structure called the Haustorium even though it can photosynthesise to a limited degree, hence hemiparasite.

The name is derived from the Anglo-Saxon words ‘mistel’ meaning dung and ‘tan’ meaning twig. ‘Mistletan’ was also a name given to the Mistle (toe) Thrush, whom, along with the Blackcap are the main players in the dispersal of its seed. The Mistle Thrush ingests the whole berry and excretes the seeds in its droppings, often onto twigs in trees….get it! The Blackcap, however, is more refined and separates the seeds from the viscus, but nutritional, flesh of the berry in its beak, which it then wipes on the twigs.

Mistletoe played an important role in the rites of the Norse people, the Celtic Druids and the North American Indians giving protection against evil, ensuring fertility and as a symbol of peace. By the 3rd Century A.D, Christianity had embraced the ‘folklore’ of Mistletoe but it wasn’t until the 16th Century that the first documented ‘kiss under the mistletoe’ was recorded.  In mythology Mistletoe was gathered using a golden sickle and caught before it reached the ground, thus preserving its magical properties!

Although December is the first month of winter, there are two highlights to be had, the first is of course the ‘big’ event itself, the second is the shortest day on the 21st when day length will steadily start to increase and is the kick-start to many biological systems.

We decorate our Christmas trees with coloured baubles but nature has its own display, look out for the red berries of Holly and White Bryony, the pink of Spindle, white of Snowberry and the shiny black of Privet. 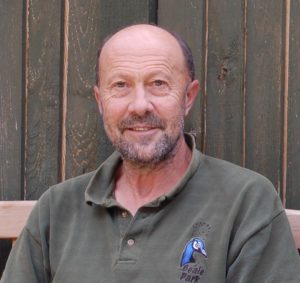 Down in the woods it may be dark and damp, a setting for one of Grimm’s fairy tales perhaps, but passions are stirring, now is the breeding season for foxes and grey squirrels, wild boar may still be rutting and even in December Muntjac Deer can give birth and also rut… may be there’s more Mistletoe around than we thought!